A few days ago I was trying to save myself as much time as possible so that I could do really important things like watch The Real Housewives of whatever city is on right now and maybe a little bit of laundry but only maybe let's not get too crazy. So I made a dish that I have made before and was a big hit. What I had forgotten was how big of a hit it actually was. I made Really Good Noodles and Chicken from Your Homebased Mom and she in turn got it from Nurse Heidi at Food For Thought. I made enough for six people planning on having the left overs for the hubs and I to take for lunch the next day. Once it hit the table it was gone within 15 minutes. I only got one picture on my poor Iphone before it was gone. Six servings of creamy, lemony, noodley goodness inhaled not because we were so hungry we were ravenous but because it is actually one of the best things we have ever eaten. Below is the recipe that will change your life and ruin your lunch plans forever.
“Really Good” Noodles and Chicken
Nurse Heidi 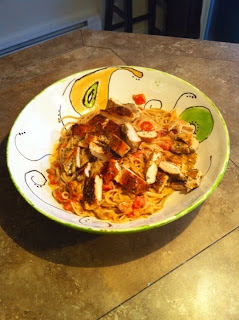 3 boneless, skinless chicken breasts coarse salt and freshly ground pepper 1 T. fresh rosemary, minced 1 lemon, zested and juiced 3 T. honey 8 ounces thin spaghetti (I prefer Barilla Plus) 2 T. butter 2 cloves garlic, minced 1/4 cup real bacon bits 1/2 cup cream 1/2 cup shredded parmesan cheese 3 roma tomatoes, seeds and core removed, diced 2 T. capers (optional)
Start a pot of water boiling to cook the pasta. Spray your BBQ grill rack with nonstick spray and fire it up. Sprinkle salt, pepper and rosemary on each chicken breast and grill for 7-8 minutes on the first side. In a small bowl, mix 2 T. of freshly squeezed lemon juice and the honey together, then brush it on the tops of the chicken breasts before flipping them over. Brush the underside as well, and grill for a few more minutes until they are cooked through (actual cooking time will depend on how thick the breast is, and you could certainly pound them thinner to start with to make it go faster). Remove to a plate and cover to keep warm.
Toss your noodles into the boiling salted water if you haven’t already. Once they are nearly done cooking, begin making the sauce. It comes together quickly. In a large skillet, melt 2 T. butter then add the garlic. Saute and stir for 2-3 minutes, then add the bacon bits and cook for another minute. Stir in the remaining lemon juice and all of the zest, then the cream. Stir in the cooked and drained noodles, adding a tablespoon or two of the pasta water if needed to thin the sauce. Slice the chicken breasts thinly. Stir in the roma tomatoes and Parmesan cheese (and capers if you so desire – I’m the only one that likes them around here, so I tossed a few on my own plate), and serve immediately with a portion of chicken breast strips on top of the pile of pasta.
**Now just a note, this recipe is amazing already as I stated but I have made it in a pinch when I hadn't had time to go to the store so I will let you into some of my shortcuts in case you are ever in a pinch and still want to make this dish.
1.In place of the Fresh tomatoes you can drain a can of petite diced tomatoes
2.You can use dried rosemary instead of fresh, just add a little bit at a time because dried herbs tend to go a lot farther than fresh so taste as you add.
3. Our family eats as much whole wheat as possible so feel free to use whole wheat pasta if you would like.
4. When I made this I thought I had honey but I didn't ( I have no idea where it went but its gone) instead I used Agave. Its a natural sweetener that is a lot like honey but sweeter so again with this taste as you go so you don't feed your family something Buddy the Elf would be proud of.
Happy Eating!
As Always,
-S 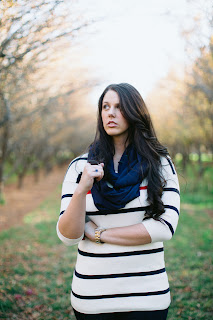 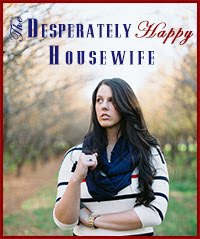